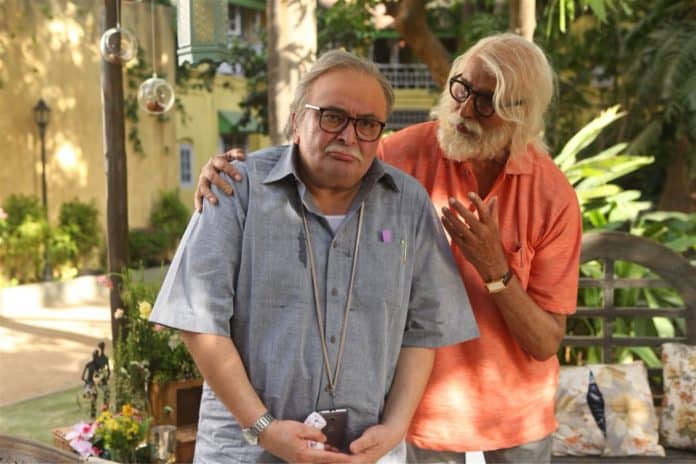 The much anticipated pairing of Amitabh Bachchan and Rishi Kapoor playing father –son is here with ‘102 Not Out’ (2018). This is the perhaps the best chance for director Umesh Shukla to get back on the hit wagon as the star cast can’t get any better. Duo Salim-Sulaiman haven’t had a big Bollywood hit in what seems like forever last being ‘Heroine’ (2012). Although this movie doesn’t have the usual plot that would give them the freedom to deliver a good multi-genre score, this movie could be the big one helping their music deliver well on the charts.

Arijit Singh opens the album with a fun & upbeat jazz composition Bachche Ki Jaan. The vibrancy and style of the song is quite unique. The music is bright and positive just like Bachchan’s character in the movie. The mix of Congo percussion with saxophones, horns, trombones and trumpets has been really well executed by the music directors. The consistency in the execution to keep it joyful throughout is something to listen to and enjoy in this song. Singh’s stylish vocals are powerful and well controlled. His ability to deliver a dynamic range is yet again demonstrated here in a class of his own. Lyrics by Hiral Brahmbhatt are situational to the film but the chorus doesn’t have the class to make this is a song easy to sing along to although the lyrics are brilliant in the stanzas. The melody overall doesn’t stick in your head right away but after a few listens this song has the ability to drive a niche following.

The next song Badumbaaa is an exciting one as we get to hear Bachchan as a music director for the first time who also got Kapoor making his debut as a singer. Bachchan along with Kapoor do a really good job as singers being senior citizens with the vocal control and expression. Credit to musical technology to making it sound precise but kudos to both of them for being the sports they are and for doing a great job with their respective vocals. The arrangement and composition of the song are brilliant for a first attempt by Big B even though it is not sensational and unique. The song is sparkling and exciting with a lot going on musically with a mix of western and desi music styles progressing as it goes along. Big B evens raps in the song! Amitabh Bhattacharya’s lyrics are fun and uplifting. The song is set to inspire as the father encourages his son to live life to a max in a total carnival setting of the song. The song really works as a dance song and overall is a very unique one that will work on radio and party scenes around the world. One doesn’t need to watch the movie to know how talented Bachchan is and that he will never get old.. you can just listen to this song to know all of that! Even at 75 he is pulling new tricks out of the bag!

Kulfi is delivered next in the voice of Sonu Nigam and lyrics of Saumya Joshi. A soft, somber and emotional song it has a lot of depth to it. Nigam’s soft and classical delivery style adds a lot of merit to the song. The lyrics are main asset of the song as Joshi compares life to Kulfi. It might melt but it has not lost its taste and flavor which is a beautiful thought to capture. It immediately brings back childhood memories and he perhaps as ageless as one enjoys it today. Musically Salim-Sulaiman keep it simple with guitars and tabla to give it that classical touch that matches well with Nigam’s voice. A song can be a little depressing to listen to as well but overall is a decent one to listen to.

Armaan Malik gets on the mic next for another jazz composition called Kuch Anokhe Rules. Joshi’s lyrics are yet again about not getting old and writing new rules in life as we continue to grow old and live life to the fullest. Malik gives the song a soft vocal touch that’s done in a classy way and has a slight retro feel to it. He does sound like Singh in parts but overall carves a niche for himself. The lyrics although good in their own right, they are a little complex that lack the ease and flow to sing along to. The composition is quite ordinary as classic jazz with nothing special about it making this a very average song.

Amitabh Bachchan revives SD Burman and Kaifi Azmi’s original Waqt Ne Kiya in a very unique way. The depth of his voice really takes one away into a different space where one would not even pay attention to the choppy vocal with lack of any flow to it. But somehow that works and is very well done by duo Rohan-Vinayak in-charge of the music direction here. With original lyrics and simple musical execution with guitars and bass, this song keeps the original mood of the song while making it current and relevant. A good song to listen to especially for those with a taste for classic Bollywood.

Hiral Brahmbhatt writes and sings the final song of the album called Phir Laut Aayi Zindagi. The song is a background slow song for the film that summarises the film in this entirety and is perhaps the climax song as Kapoor’s character comes back to living his life with a smile. The vocals are rather flat and monotonous although well controlled and have a good texture to it. The lyrics are quite average too that lack any sort of rhyme or poetry to it. Musically the song is rather depressing to listen to although the song is about getting one’s life back perhaps as per what the scene demands where this song fits.

FINAL WORD
The music album of ‘102 Not Out’ is an exact mix of uplifting and depressing songs. Although for a movie about not giving up in old age there are still a decent number of slow songs here that somber up the mood that the uplifting and party songs create at the start of the album. So as one starts the soundtrack in a happy mood, one might find the mood fading away towards the end. Salim-Sulaiman do a mediocre job on their songs overall while Bachchan steals the show like he always does in whatever he does. Bachche Ki Jaan is perhaps the best song of the duo thanks to his super jazz composition and vocals by Arijit Singh. Big B kills it with his party song Badumbaaa as he gets Kapoor to sing for the first time too on his own musical direction. His vocal style on Waqt Ne Kiya is worth a listen too. Sonu Nigam and Armaan Malik deliver good vocals although nothing too fancy. Overall the album is inspiring more than anything else.. be it in this lyrics & message or the very fact that Big B is still reinventing the wheel at this age. This soundtrack is not one that will stand the test of time and stay ‘not out’ for a long time but it surely will make a mark with its top 3 songs for now. Previous articleFarhan Akhtar & Shraddha Kapoor avoid working with each other? 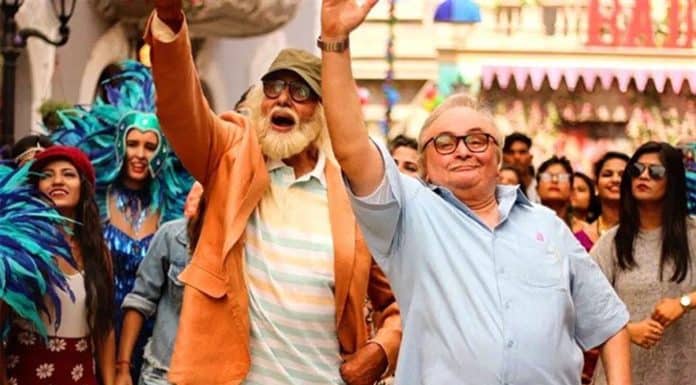 Next articleMovie Review: ‘102 Not Out’