Half of adults in the UK now use social media to keep up-to-date on the latest news, according to Ofcom’s annual news consumption report.

Ofcom’s quantitative study, News consumption in the UK: 2019, looks at the way adults and older children in the UK consume news across television, radio, print, social media, other internet sources and magazines.

Other findings from the research include:
► After TV (75%), the internet is the next most-popular platform for news in 2019 (66%), followed by radio (43%). Over a third of adults (38%) get their news from newspapers. But, when combining traditional print with newspaper websites and apps, overall use increases to 49%;
► BBC One remains the most popular news source, despite a decrease in use since last year (58% in 2019 vs. 62% in 2018). Use of BBC News Channel and BBC Two for news has also decreased since 2018 (from 26% to 23% and 14% to 11% respectively).
► After BBC One, ITV (40%) and Facebook (35%) are the next most commonly-used news sources;
► While use of Facebook for news has remained stable year on year, more people are using Twitter (from 14% to 16%), WhatsApp (from 10% to 14%) and Instagram (9% to 13%);
► Magazines are rated more favourably than any other news platform for quality, accuracy, trustworthiness and impartiality. Social media platforms tend to be rated least favourably on these measures; for example, only 37% of people who use social media for news said they thought it was impartial, compared to 78% among users of magazines, 62% for TV, 61% for radio and 58% for print newspapers; and
► Six in ten older children aged 12-15 claim to be interested in news. Three quarters (76%) said they read, watched or listened to news at least once a week. 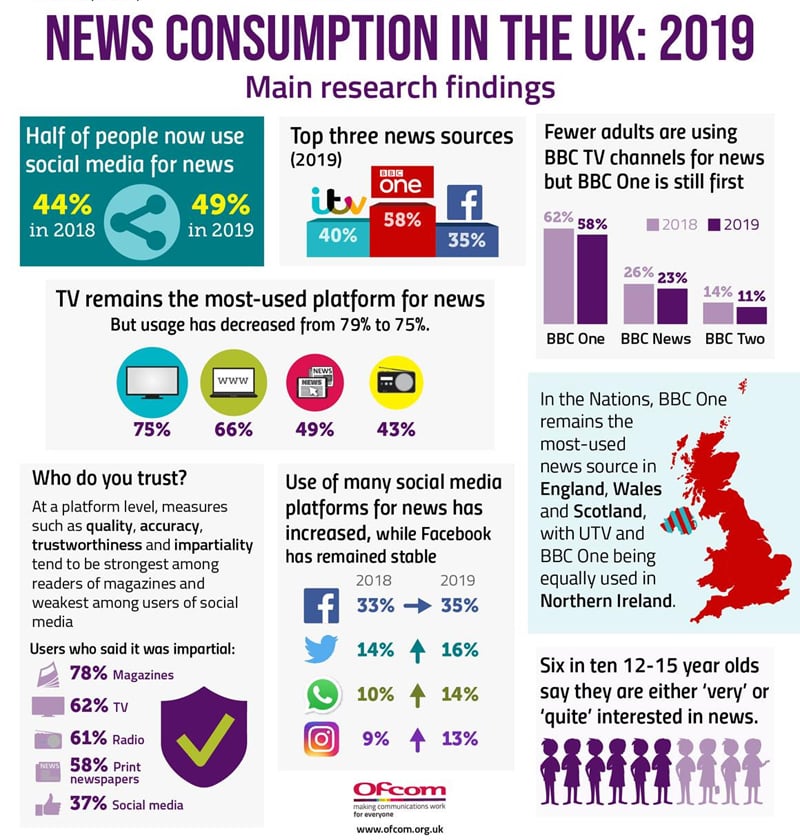