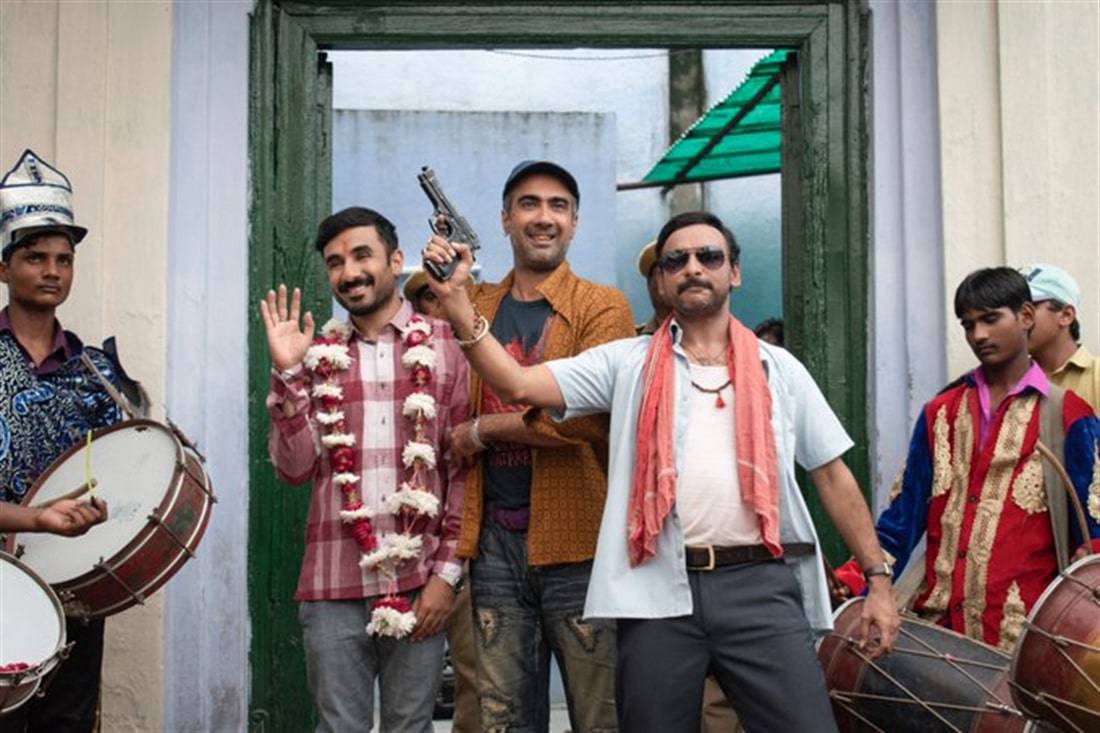 Three years ago Vir Das had a crazy idea. What if he was a killer comedian, literally? Nikkhil Advani saw potential and decided the story needed more darkness. After months of hard work, Netflix’s dark comedy miniseries ‘Hasmukh’ was born.

Hasmukh Sudiya (Vir Das) is an anxious, troubled young man who dreams of becoming TV’s Comedy Badshah as he struggles to deliver a joke. Frustrated by constant ridicule, he lashes out at his guru – the famous pakoda-obsessed UP comedian Gulati (Manoj Pahwa) – and accidentally kills him. The murder taps into an addicting darkness within Hasmukh, giving him invincible confidence to deliver a flawless comedy set. People are dying… of laughter.

Despite his grave crimes, Hasmukh inherently believes he can still be a good person. He is taught early on that comedy is a great way of dealing with trauma (which he has in spades), but ironically Hasmukh can only perform in the fleeting moments when he feels like he has conquered his damage, no matter how scarring his “healing” really is. We see Hasmukh fight his demons while being haunted by a ruthlessly taunting Gulati. Assisted by manager Jimmy Moses (Ranvir Shorey), he desperately goes through with half-baked murder plots for a killer five minutes on stage. And then he moves to Mumbai to finally compete on ‘Comedy Badshaaho’, slowly choking all the fun out of the series.

Once the setting is changed, everything in the show shifts. In UP, Hasmukh fights for control over his life, but in Mumbai the murders become more about justice, revenge or just a matter of circumstance. That personal motivation which made Hasmukh’s messed up actions easier to sympathise with is lost. The murders become a chore because now the tormented Hasmukh is a “good” person, so he can’t feel too gratified, just enough to justify killing for a winning performance. The show’s narrative pushes you to confront the dilemma between ambition and morality, but if we are five episodes into a show about a comedian who murders people for the “feel”, do we really care about his ethics?

Adding salt to the wound, the characters Hasmukh is surrounded by in Mumbai are entertainment industry clichés who lack any authenticity or charm, helming a significant chunk of the plotline that doesn’t directly involve the main character. Some characters, like Jameel Indori (Raza Murad) and occasionally inspectors Tawde (Jaywant Wadkar) and Naik (Rahul Pethe) still shine, but even they pale in comparison to the compelling absurdity of the ensemble in UP.

The cast of ‘Hasmukh’ does so much heavy lifting to make the weak off-stage jokes work. Das has lived with Hasmukh for years, and it really shows. There is freshness in his on-stage persona and it’s clear that he has a deep understanding of the character’s comedic style and journey. Pahwa and Shorey are effortless, further cementing their consistent comedic brilliance. It is also interesting to see the hilarious Inaamulhaq and Joanna Robaczewska who are both ‘Comedy Circus’ alumni, perhaps a cheeky nod to the TV shows ‘Hasmukh’ alludes to. It’s quite sad that the show fails to slay despite all the talent.

Ultimately, ‘Hasmukh’ works well when it embraces the campiness of the premise and the characters, losing direction whenever it focuses on its moral compass. The first two episodes are spectacular at presenting the concept of the show: small town comedian finds his onstage mojo via murder, but the rest of the series doesn’t know where to go from there. Instead of leaning into the evil, ‘Hasmukh’ decides to cautiously poke it with a stick and run away, choosing to frame Hasmukh as a misguided vigilante instead of the anti-villain he actually is. By the end of the season you’re just left with frustrating questions. Why is there a redemption arc for a serial killer? Who approved all these catch phrases? And which TV channel lets their comedian swear on national TV?